This summer has been less than typical for me. Usually, my summer revolves around outdoor trips to iconic climbing destinations, but this year, I traveled to compete. First, I went to Vail to compete in my first ever world cup. I was fairly nervous as I had never competed at that level before. I felt a bit star struck as I warmed up along side the best climbers in the world. What the heck am I doing here? I wondered what possessed me to come to a venue like this and potentially embarrass myself. I’m also positive that I was the oldest competitor and the only female competing who is also a mom. I decided to just let go of my insecurities and look at it as an opportunity to climb some of the best set and most interesting problems that I have ever been on. As I turned to look at problem 1, I giggled. This problem was set with those cool looking orange rectangles that were used at ABS Nationals in finals. While sitting in the audience at Nationals Finals, I wanted desperately to touch those holds. Now, I was getting my chance! And they were tricky. The setters brilliantly designed a climb that consisted of clumps of these holds. The problem is, as you move from one cluster to the next, you find yourself touching each of the holds, fondling all surfaces available until you find the space that is remotely possible to hang on to. This was really hard! After multiple tries and miscalculations, I found myself in the last cluster. I was tired, and I couldn’t power through. But I got the bonus, which as it turns out was pretty decent compared to much of the competition. The next two problems were a blur of brutally hard moves off the ground. Indeed, I was feeling frustrated. I wasn’t alone. Going back into iso between problems I was met with drawn faces, teary eyes, and frustrated noises. My fellow competitors were definitely struggling as well. Michaela Kiersch, a seasoned competitor, tsked the downtrodden crew. We are only 1/2 way through….don’t get down on yourself! Personally, I wasn’t feeling too upset. I didn’t really have many expectations. I also realize now that being older is a real advantage. I have better emotional regularity. As a 31 year old, I can recognize in the moment that even if I do super horrible, life will go on. Honestly, it won’t change anything in my life.But, I remember my 17 year old self well. 17 year old Molly would have probably melted down at the point. So I moved on to problem 4. I was so happy to see my best friend in comps…mantle to slab! Yes! It took a little finagling and some finger nail pulling, but I got up problem 4. I couldn’t be happier. Problem 5 was a repeat of two and three (I need to work on power), but overall, not a bad day. I finished in 24th, just 2 attempts away from making semis! I was pleased. I finished 6th out of the US women (18 competed) so this made me pretty stoked.

Two weeks later, I boarded a plane for Montana. The plan was to teach a week long horse camp (which by the way I also organized), then head to Bend OR for their Summer Comp. The drive to Bend is 9 hours, and I would have my mother and 2 year old son in tow. Allow me to lay this out. I taught in the hot sun for 8 hours daily, ran activities, dealt with issues that were rather stressful at camp, and then got in a car and drove 9 hours. This was on top of never getting more than 6 hours of sleep all week. I was also eating CRAP, and I didn’t touch a climbing wall for 7 days. So, I arrived to the qualifiers bleary eyed, under-nourished, and stressed. To add to everything else, I wasn’t going to this comp for funsies. I was going to win some money. My hubby and I have been living tight financially, so I wanted to win some $$ to help get some bills paid. This is a high paying comp. 1st wins $2500, 2nd $1500 and on down to 5th at $650. I knew that some strong ladies would be in attendance, but I was hopeful.

I had the WORST climbing day in qualifiers. I would feel really strong for 2 moves, then I would pump out. I could be on the largest jug, and my hands would simple peel open.What. The. Hell. Alright. I needed to pull it together. In the last few moments, I pulled out a climb that gave me the points necessary to squeak into 5th. Wow, that was close. I went back to the hotel, ate some veggies, and took a nap. I woke, ate some more good food, and napped again. I did this multiple times, and was feeling somewhat human by Saturday night which was finals.

Finals was awesome! It was set at a brewery and was outdoors on a wall that was built for the comp. The holds were all brand-new. The setting was great. In the end, I sent 3 of the 4 problems taking 2nd behind Alanna Yip. Not too shabby. The best part was, as soon as I finished my last problem, the comp organizer handed me a brew. Pretty sweet.  I deposited my $1500 and headed home. I will NEVER compete for the sake of money again. That was awful! The comp would have been so enjoyable if I had the mindset that I take to every other comp. This is a fun opportunity to climb well-set problems and climb with other like-minded climbing chickas. And, if I am lucky, I might get to help put on a good show in finals. This to me is the only mindset for competition. 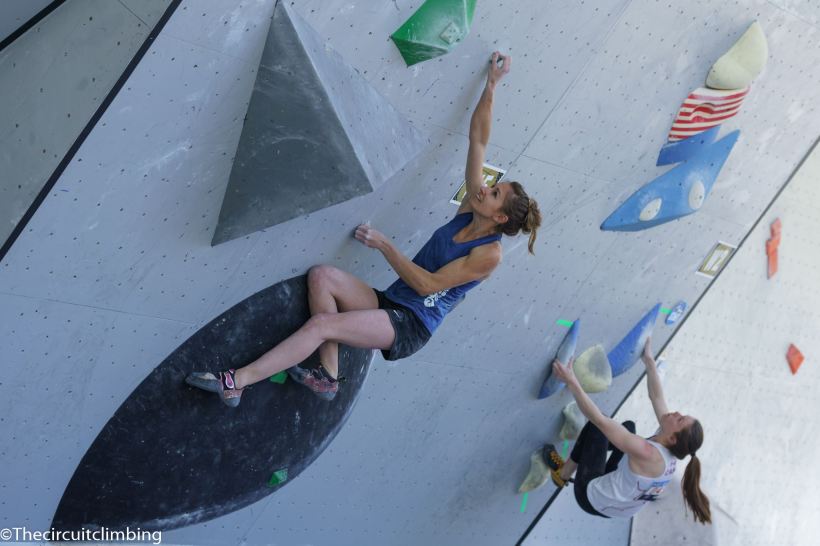